Ever since learning JavaScript I've been struggling with how I can export and reference variables, functions and JS objects from one file to another. I think I've got it now, so this is a good moment to outline how and when you use these exports and what the main differences are. Let's also look at how we traditionally (pre-ES6) used functions and variables from multiple files. 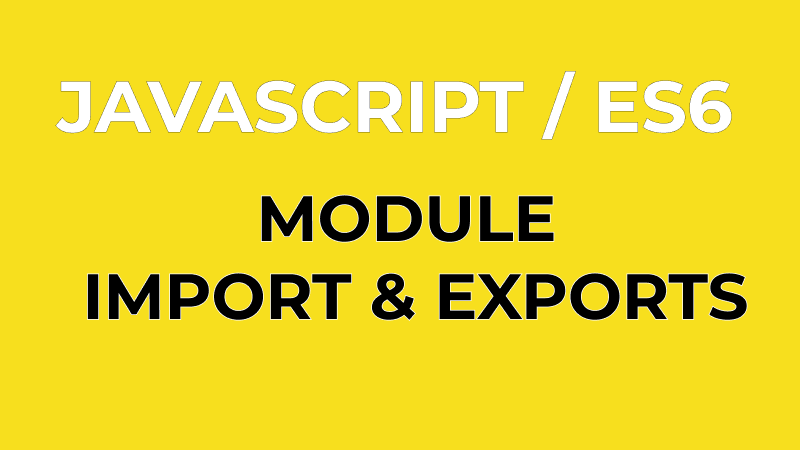 What are imports and exports?

In the official MDN docs we read the following definition of import and exports:

The export statement is used when creating JavaScript modules to export functions, objects, or primitive values from the module so they can be used by other programs with the import statement.

When you just use 'vanilla JS' - which means not a framework such as VueJS or ReactJS, you typically work with script tags in your index.html file. The only thing you then have to take into account is the order in which you put the links in the index file. If you're referencing a variable or function before you have created it in another file you'll get a warning which indicates that it can't find this value. However, you can easily fix this by shifting your script links around. That logic was fairly simple to understand for me. But the downside of this method is that your browser loads all the file contents and all files you have links for in your script tags, even if you don't use them. This can negatively impact page load. Take for example the data visualisation library D3.js. You can reference the library from a CDN link and it will on page load grab the whole JS file. The benefit of this is that you have access to all its functions and functionality. However, you are loading a lot of elements which you probably will never use.

ES6 to the rescue

With ES6 we can now import and export modules in other files. What that means is that you can have several JS files that each have functions and variables that you can reference. ES6 gives us two ways of doing that: default and named exports. Let's take a look at the default export first.

I've encountered this default export one the most and it's essential to understand if you start working with modern front end frameworks such as VueJS and ReactJS. Let's look at an example:

For clarity I've put the import and the export in the same code block. But obviously these import and exports are in different files. You can see that you can either export the function at the end of the file, or inline when you create the function. There's no difference here. In my example I'm exporting a function, but you can also export classes, constants, objects etc.

There are a few things to note about the default export:

This brings us to the named export. First an example:

A few notes about the named export:

The problem with named exports is that you need to know the exact name of what's being exported because that's what you need to reference. Another problem is that if you need to import a lot of things then the number of variable names in between your moustaches '{}' might be large. The latter problem can be solved by using a wildcard when you do your import: